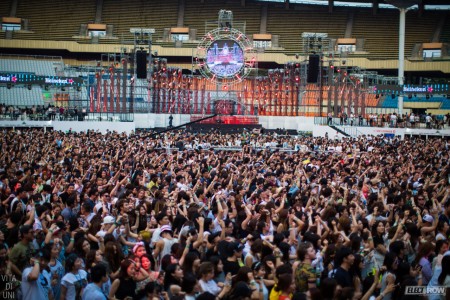 Three weeks since Ultra Festival finished and it was already time for another festival.  It was the Fourth of July and what better way is there to celebrate than with a massive festival, great music, energetic atmosphere and over 25,000 other party people! My friends and I headed back to Olympic stadium and got in the zone for the 5tardium festival. The name of the festival is pronounced Star-dium due to the layout, which is in the shape of a star.  Once we arrived at the stadium we checked in with the press booth and picked up our wristbands.  The will call and press tents were all really well organized and it took no time at all to get into the stadium.  We arrived to the stadium around 4:45pm and there were no lines for anything yet. The 5tardium crew took some extra precautions for the MERS outbreak this year.  When entering the stadium employees measured our temperatures and we were required to use hand sanitizer. This is a good idea for any festival and it was reassuring to see them being cautious. Luckily, the turnout and lineup was not affected by the MERS scare.  After we got into 5tardium I could immediately tell that it was going to be a great festival. The energy and layout was even better than I could imagine. I had heard rave reviews from previous attendees. The set up was hard to envision, but I really enjoyed how well everything was put together. We entered during the beginning of Alex Metric and Oliver’s set then proceeded to the VIP area.  We lounged in a few of the VIP areas and of course went out in the crowds to rage with the other festivalgoers. 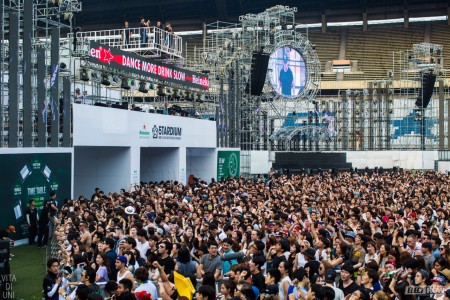 The 5tardium festival is presented by Heineken and features 5 different stages to represent the shape of a Star, which is the Heineken logo. The layout feels more like a circle or decagon than a star, but it is a cool arrangement. Each stage features one artist and there is a rotation once the DJs finish playing their set the stage switches. The DJ transitions were all done seamlessly and there was little to no down time between each set.  5tardium is described as 1 night, with 5 stages and 5 different experiences.  Each stage has a bar area between the other and on top of the stage there is a VIP area. Right outside of the entrance, there is a nice area of tents set up where you could sample Desperado beer and there were also areas to purchase food.  The location outside of the stage is great if you want to get out of the crowds in between sets. The VIP areas had a great layout too, with couches and tables for lounging and listening to the music. The VIP included free beer, food and private bathrooms.  I would highly recommend this for people attending next year, since you can get the best of both worlds by relaxing in VIP and then heading out into the crowds to party!

The first performers played a back-to-back set on the same stage. Alex Metric and Oliver have collaborated before in the past and produced a track together called Hope and Galaxy. Oliver is comprised of U-Tern and Oligee. Alex Metric is a British house DJ who has produced a lot of great tunes over the years. The B2b trio put on a great first set and did a spectacular job of warming up the crowd for Andy C and the rest of the festival. The crowd was a split into people enjoying from afar and sitting down listening to the music, but a big amount of the crowd was full on raging in front of their stage.

The highlight of the festival for myself personally was Andy C. He is a popular drum and bass DJ from England and has spearheaded the scene to become an international D&B legend. Andy C put on a fantastic set and the entrance to the festival got a little congested early on since so many people were crowding around his stage.  After his set finished, I had the chance to speak with both Andy C and MC2SHY over a few glasses of champagne. It was great to hear their insight and perspective about the rapidly growing music scene in Korea and the rest of Asia.  Both Andy C and MC2Shy were thrilled to see how much energy and enthusiasm the crowds had in Korea. I think Koreans are continually gaining an appreciation for all genres of dance music and this love for party music continues to grow each year.

The American Trap DJ, RL Grime, played the third set of 5tardium. RL Grime is originally from California and broke onto the scene early in 2011. He has gained a massive following over the years and has produced a lot of quality music alongside some fantastic artists. RL Grime made his first appearance in Asia during the 5tardium festival this year.  Judging by the great response from the crowd, I think RL grime will undoubtedly be returning to Korea and Asia soon!

The fourth DJ set of the night was performed by MAKJ, aka Mackenzie Johnson.  He is an American electro house DJ who has collaborated with a number of famous artists such as Hardwell and Lil’ Jon. When MAKJ came on the sun started to set and the nighttime rave ensued. During his set people were blown away by the synching Pixmob wristbands, which glistened, bright green to the sound of MAKJ’s beats dropping.  It really was a spectacular scene to witness and overloaded almost all of my senses.

The last DJ’s to play at 5tardium were the world renowned Dutch Duo, Vicetone.  The duo is comprised of Ruben Den Boer and Victor Pool. Vicetone was voted into the DJ Magazines top 100 DJs list as #36 on the chart in 2014.  Vicetone has played a few shows in Korea such as Ultra and the Playhouse Festival in 2014. They returned back to Korea to put on a great set at the 5tardium.  Since Vicetone had played a few times in Korea, they were able to really cater their set towards the liking of the crowd. Everyone at the 5tardium festival went absolutely crazy when Vicetone came out and people were pumped up for the final performance of the night. 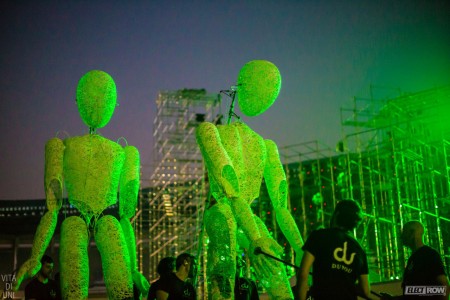 Lucent Dossier and RJ Dancers came on stage during the DJ sets to dance and keep the crowd interest at an all-time high.  As soon as they walked out, cell phones went up and pictures were snapped.  Each stage had a different experience, even down to these performers.

Heliosphere was another one of the incredible performance extras at 5tardium.   A giant, lit-up sphere floated high above the crowd as a gymnast dangled below.  The beauty of the gymnast’s performance attracted a lot of attention and everyone’s eyes were to the skies.

A new addition to 5tardium this year, Phoenix was absolutely outstanding. They incorporated fire, pyrotechnics, LEDs, lasers and much more into their dancing routine. Their unique performance blended well with the entire 5tardium experience.

Dundu provided giant puppets that made their way around the crowd during the stage performances.  These giant white figures were lit up and visible from everywhere inside the stadium.  Although there were people controlling them on the ground, from afar, they looked simply magical.

Pixmob provided LED lighting in the form of bracelets and balls.  The bracelets are controlled remotely, so that they would light up altogether and change colors.  Once lit, you could see a sea of light as the crowd members held their hands high.  The balls were thrown out during the end of the last set and could be seen bouncing on top of the crowd.  They were also programmed to change colors once hit, so they would flash between white and green. 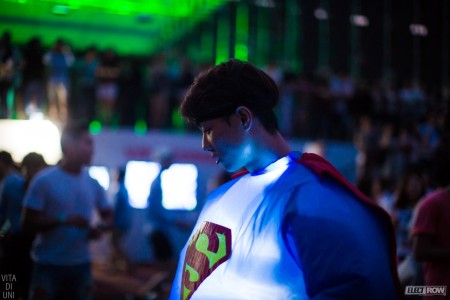 Overall the 5tardium festival was another huge success! After traveling and partying all over the world at different venues in the US, Europe, Australia and Asia I can indisputably say this was one of the top festivals I have been to.  The five stage festival concept is really unique and it worked out exceedingly well!  The combination of five different genres on five stages is something that mixed together tremendously well over the course of the festival. All of the artists contributed their own unique style that blended together like a well mixed cocktail.  I can definitely see the 5tardium festival growing into an international event that would astonish the world one country at a time!