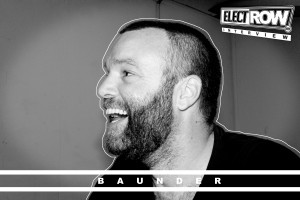 ELECTROW: In Asia, but why Korea the first time?

BAUNDER: I really don’t know. I’m doing an Asian tour and the first step of the tour is Ultra Music Festival. So, from here I’m doing two shows in Japan and then two shows in China.

ER: Well you’re going to be busy. How long will you be on the Asian tour?

ER: We’re happy for you. In Korea, you’ll find a very responsive group, and even in Asia, you’ll find a lot of love from the crowds here. And personally, we listened to your stuff, and we love it.

ER: I will tell you that you share a very strong passion for authenticity. And we just spoke to Paul van Dyk, and we know that you have a common performer that you also both respect who is Sasha. So this is something that is putting you all at high levels because I think because of the way you approach things.

B: Well when I started making music with my partner as Soundexile [with …]l, we tried to make music different. My partner comes from a very different musical background and so do I. So I think that the mixer of that is what makes our music different.

ER: Well now was that difficult to mix those two backgrounds?

B: Sometimes it is and sometimes it’s just natural.

ER: So you’ve got a natural blend that really sometimes works very well.

B: Most times it works perfect. Sometimes you have to arrange things, but normally we share passion for bass, you know? Then melodies. It doesn’t have to be dreamy. Just good melodies. That’s what we like. So maybe he’s more pop oriented and I come from a rock background when I was a child, and I think that’s the mixture.

ER: Have you got any other exciting things coming up in 2014 that you’re looking forward to?

B: Right now, yes, we have in Buenos Aires, Creamfields Festival. It’s a very big festival in England and they do it in Argentina too.

ER: Will that be several days?

B: No, that’s one day, but it’s Argentina’s biggest festival with Ultra Music Festival. In Argentina this [UMF] was the first year they did it.

ER: Along the lines of coming down to South America, we understand that Ultra might come to Brazil as well. Will you be on that?

B: I still don’t know. I hope so. I think that this festival is great.

ER: That’s exciting. So back home and then Creamfields.

B: It used to be a very big club in England. It was called Cream, and then they did the first outdoor festival, called Creamfields. [In] Argentina, this is gonna be the, I told you, number 12, so it’s a very old festival.

ER: Great! So, do you think you’d like to come back to Korea again?

ER: Have you experienced any side culture in waiting for your shows and things?

B: We did that and I experienced a lot of nice food.

B: Korean BBQ. It’s perfect! We have friends living here and they know special places to go. So, we’re doing a lot of things.

ER: Were able to find any Argentinean food here?

B: I think there is one. But, you know, we eat Argentinean food everyday so…we prefer Asian food.

ER: They’ve got some delicious food and the fermentation is marvelous. Now, being in Korea, any plan to work with some of the Korean or Asian producers?

B: I haven’t really arranged anything. We’re staying here just one more week and then we’re doing Japan and China. So, I might do something, but maybe like a collaboration online instead of working here. Nowadays with internet, you can even work in different parts of the globe without problems.

ER: Right, so the clock and the distance and the miles don’t matter as much as the coordination?

B: Exactly, and the love for music.

ER: Do you prefer these larger venues, maybe the clubs? What’s your feeling?

B: I think both have their special things. Big festivals…people come to have a lot of fun and it’s always fun. Clubs…maybe it’s a little bit more work. You know? You have to get the vibe of the club and stuff, but it’s always perfect too. So, I think, I enjoy both.

B: This is my first big experience outside of Argentina. I’ve done South America…many places in South America. But, this is my first tour, you know? I am already planning a Europe tour, but I don’t know if it’s gonna be…maybe June, next European summer, so I can do Ibiza, [etc.] Yea, most probably I will be doing that next year…next summer.

ER: I wish I was gonna be there. Maybe I’ll plan that.

B: I lived in Europe for five years.

ER: So you’ve got some roots there?

B: No, it was just trying new stuff.

ER: At that time were you kind of young in your artist career?

B: Yes, exactly…in my mid 20s. I think Europe helped me build my career a lot.

ER: Is there anything about this Asian tour that attracted you to come this way?

B: I think the whole experience is what got me here. Playing in big festivals, I’m gonna play in smaller clubs, and being able to be in…I mean Argentina is the other way of the world. I had 32 hour flight. Not one flight, there were four flights, but it took us 32 hours to get here, so it’s a lot. I think everything here is amazing. I’m enjoying everything, basically.

ER: We’re going to do an issue that is going to ask some of the local Korean producers, some of the strongest ones on this peninsula, what they would recommend, 1 or 2 tips for younger DJs. We want the DJs to learn from the mentors and some of the folks that have got the experience. We don’t want to waste that and we want to take advantage of the fact that we can ask you. What tips could you give some of our young, aspiring DJs here?

B: I think the main tip that someone gave me many, many years ago was “Never quit.” I mean, you’re gonna make music [and] have bad reviews, good reviews, regular reviews…you don’t have to stress with that. You have to believe in yourself and keep going forward. I think that’s the main tip if you are loyal to yourself.

ER: Did you suffer some setbacks that made you become more determined?

B: Sure, yeah. I remember the first time I sent my first track…the first time I took the courage to send my first track to a regularly known DJ, he wasn’t a very big DJ, he said it was shit. If at that time, I would have said, “Okay, but I won’t do music anymore because he said it was shit, I wouldn’t be here.” Keep forward. Keep moving forward. If you really love what you’re doing, it’s just a little pebble in the road.

ER: Do you do any mentoring of DJs and others in Argentina?

B: Yes, I teach in a school there. So, we do a production and a DJing course.

ER: How old are your students?

B: I have very, very young people like 17 and then I have a guy that’s 45-46. [I have] a guy that said, he’s a lawyer, and he said “I don’t want to be a lawyer anymore,” and he said, “It would be great to DJ.” Argentina has a very old fan base, you know? Because electronic music has been in Argenitna for like 30 years, so there are old people that follow electronic music. It’s not just young. You have the young crowd – the one that gets built everyday, but then you have loyal, older fans?

ER: Are you a musician by original trade?

ER: Could you share with us what your original instrumentation and what your musician background is?

B: Keyboard. Piano. I love synthesis, you know…synthesizers. And I love everything that involves them.

ER: Being in Argentina, is there any Latin influence in some of the stuff you do?

B: I think there might be a little bit, but I’m not that drawn to Latin music as a whole actually.

ER: You’ve got a passion for bass and that is usually on the percussion side of the house, so where does your percussion knowledge come from, or is it just instinctive.

B: Instinctive. I’m a wannabe drummer. I never had the chance to get a drum kit when I was young, but I would love to be a drummer.

ER: I’m here to tell you, I’m a drummer, and I listened to your stuff, and I immediately thought that you had a background in drumming.

ER: That syncopation that you throw out…that’s good stuff. And it’s not repetitive. Anybody can throw a kick drum.

B: When we’re making music we try to have something interesting happen every few bars. Little things that make it different, not just nuh, nuh, nuh.

ER: I’m really looking forward to your show, and I wish I could follow you around Asia. I know you’ll find a lot of success. Is there anything else that you want to mention to the people that read ELECTROW here in Korea and the rest of the world?

B: Just that Asia is great. That’s all I can say. What I’ve seen of Asia right now is great. I know I’m gonna be seeing a lot of great stuff in these following weeks.