“It’s kind of brought Irish people around the world together.”

Last week, Katie M posted a picture of a response she received while inquiring about a teaching job in South Korea. If you are not familiar with this story, be sure to check out the BBC’s summary.

Luckily, Katie is currently living in South Korea, so ElectRow was able to sit down with her over a beer and discuss the events that unfolded and how she felt about everything. Kate was a bit disheartened when she first read the response on the 26th of October. “When I first received it I was just annoyed and trying to get a job, and I thought, if this is how it’s going to be I am just going to go back to Ireland because I wasn’t getting any positive feedback”. Katie also took the response the way most Expats living abroad in Korea would. “We’re just used to it here (Expats living abroad).  We’re used to hearing all this stuff and we just become immune to it.”  In fact, Katie said this is not the first time she has dealt with the topic of drinking and employment. “Every interview I’ve had, they ask me ‘You’re from Ireland, do you drink a lot of alcohol?’.  I have been told by other recruiters, that I need to put on an American accent, if you want to get this job.”  The alcohol question posed by employers is a bit of an odd one considering that Korea is one of the heaviest drinking countries in the world. Don’t believe it?  Check out this article that ranks soju as the most widely consumed alcohol in the world.

Katie continued her search for jobs, but the response she received kept running through her brain.  “A few days later, I was telling everyone in the hostel… and this Australian guy was ‘you need to put that online’, so I posted it on Facebook and made it public and a few friends shared it.  One of my friends knows a guy at the BBC, and he saw it on my friend’s profile and contacted me.  And that’s where it went from.”

After Katie’s story went viral on the internet she has had lots of responses from all over the world. “I got some emails from Korean guys apologizing, ‘on behalf of our country I want to apologize for this email, and check out this school my friend runs who would be happy to hire you'”.  In fact, Katie has been getting job offers from all over.  “I have had job offers from Korean schools, American schools, and other south east Asian countries.  They said, ‘We like your kind here.”’. However, the effects of this email held the most weight in Katie’s home nation of Ireland.” Irish people feel affected by it.  I got a message from an Irish guy saying, ‘ I feel really sad for what happened to you…for not hiring you because they think you’re an alcoholic, and to do this to one of our girls there is a big support base in Ireland”.  Some of the messages Katie received were more light hearted and stated ” Just forget about them, go have a pint, drown your sorrows  and do what we do best.” Katie had this response – “Ireland.. at least we can laugh about things like that.”

Besides all the positive messages and job offers that Katie has received from around the world, she was able to find a job teaching in Korea.  “Actually the day before I put the (email image) on Facebook, I had an interview and the next day…they offered me a job”

ElectRow wishes Katie the best of luck in Korea! And a big thanks goes out to her for sitting down with us and talking about her adventure of finding a job here. We at ElectRow feel she used the proper response and handled the rudeness with the utmost grace and composure. 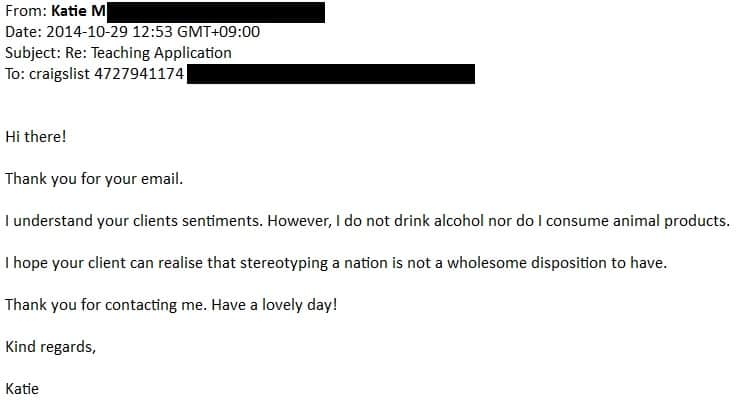