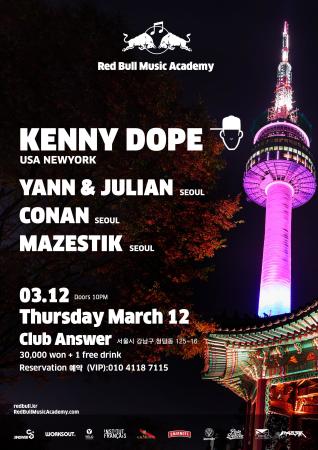 The Red Bull Music Academy held a heavy presence in South Korea during the start of 2015.  To help increase awareness and promote this year’s academy in Paris, several events were held throughout Seoul.  Lecture sessions with Brenmar and Todd Edwards gave us rare insights into their lives, while their DJ sets kept Seoul fans dancing until the early hours of the morning.  DJ Earl and DJ Taye were also in town for a Red Bull Music Academy clubnight, giving Seoul a taste of Chicago’s juke and footwork styles.

Even though the application process for the academy in Paris has ended, the Red Bull Music Academy hasn’t stopped giving Seoul some special events.  This upcoming Thursday, the 12th of March, four-time Grammy nominated DJ/producer Kenny Dope will be at Club Answer for what is sure to be one of the best RBMA clubnights yet.  If you aren’t familiar with the name, you will most likely recognize some of his work including: ‘Alright Alright’, ‘Dum Dum Cry’ with Todd Terry, and ‘The Bomb (These sounds fall into my head)’.  He was also one half of ‘Masters at Work’ with Louie Vega.  He is one of the most prolific artists of the modern music age, so you will want to clear your schedule on Thursday night and make sure you are in attendance.

With support from Yann & Julian, Conan, and Mazestik, doors will open at 10 PM for the event in Gangnam.  The event cover is set at 30,000 KRW and will include 1 free drink.  However, if you want to avoid dropping the cash, you can register for the guestlist right HERE.  You must register before midnight on the 11th of March and you must get to Club Answer before midnight on Thursday.

If you want some more information, be sure to check out the event on Facebook right here.  We look forward to seeing a lot of you at Club Answer later this week!  Let us know if you are in the crowd by tagging us in photos on Facebook or Instagram (@electrow_magazine)!