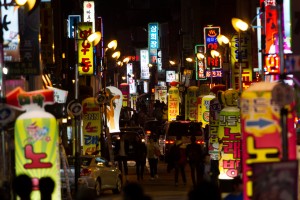 These days it seems like everyone makes a really big fuss out of human sexuality. People should maybe spend less time thinking about sexuality and just have sex, but heck I guess mid-90s identity politics is still cool. So yes, this whole sexuality issue is one big political and identity mess. What happened to just caring about real issues like the ozone layer? Is the ozone layer still a thing? It should be, cause I care more about UV rays than who someone is sleeping with. But since sexuality and sexual identity are such hot topics these days, I decided to go to a gay bar.

I’m from Canada and in Canada, gay is no longer a thing. It was “in” around, I think 2005, but then the conservative, yes read that, the conservative government decided to do that thing in politics when they don’t undo a law, this one regarding gay marriage. I think they realized that gays are NOT ruining the universe (Toronto) but rather people who eat too much sugar are. My trainer said my BMI was now 21% body fat, all in my stomach. Oh, back to this gay bar.

I knew gay bars existed in Korea. I mean if there are gays in Iran, contrary to what their anti-Semitic anti-gay former and maybe even current presidents say, there must be gays in Korea. And where there are gays, there must be gay bars, right. Does my logic follow? Oh Prof. Robert, pronounced, Ro-bear, and he was a bear, you would be proud.  I can still form a logical argument. He was my professor of deduction and logic in my undergrad days. Oh yeah, this gay bar.

I called my little Chilean friend who looks less Latino than I do. I’m also technically Chilean by the way, because my grandma’s from the Portuguese community of Santiago. That makes me Latino according to the United States Census people. Woo woo I should apply for medical school at Yale. Oh identity politics, teee heee hee. C-Lo, I call him C-Lo because he really has a @#$@$@ up his ass about his name. You’d figure for the amount he’s taken it up there he’d be a little more relaxed and know how to take a joke. Either way I called up C-Lo and said hey take me to a gay bar. I want to cover someplace fun for my really boring radio segment. If you didn’t know I used to be a culture and lifestyle reporter at a local radio station. Used to be, I moved my show to a new place and changed the format.  I said, “Take me to your usual hang-out spot in Seoul.”  He said the gay bar in Itaewon. I said “No, not the gay bar in Itaewon. Everyone knows Homo-Hill.” That is not exciting to me. I even know Homo-Hill and I haven’t left my house for months.  I have a very rational fear of the sun and public transportation and public surfaces. Let’s just say I stay home a lot.  He said “Ok, there is this bar in Jungkak area.”  I said “Ahh, that sounds cool. Let’s go.”  And we did, off to a gay bar in Jungkak.

We got off at Jungkak station and walked around a bit. I didn’t really pay attention to where we were going. I did notice the local community though. There was lots of guys holding hands but not like some older Korean guys hold hands. This was much more intimate. I also noticed that the buildings had a lot of those rainbow triangle things I remembered from university. I seriously don’t get the whole rainbow thing, that needs a redesign.

After walking past a lot of bars that had the rainbow triangle and me asking every five meters “Is that it?” (which is never was), we eventually reached the place. In a nondescript building, with a restaurant on the first floor and a church on the second, oh Korea, we arrived at Uwoo. Looking up to the top floor is this regal looking deer bust logo. Since I like animal logos I knew I would like this place. Had it been a tiger, even better. After schlepping ourselves up the stairs, and according to my trainer I need more stairs in my life, we arrived.

The interior is awesome. A lot of bars suck. A lot of bars are camp. A lot of bars are designed by idiots. This bar is not. The tables are these thick picnic table like heavy wooden tables, with a mixture of concrete and wooden-trimming on the walls. The space is intimate, noisy, smoky and perfectly lit. It is not too dark, but also not too light. I think it might be one of the best bars I have ever visited.

The waiters, servers or bar-tenders, whatever they want to be called these days, were also all impeccably dressed. Not totally matching, but close. The service was prompt and done with a smile. Also, what I really liked, was no one attempted to speak to me in English. People just treated us like we were one of the crowd.  We ate a fruit bowl and drank two beers. That was about it. Nothing special. Around ten-thirty we both went to our respective homes, alone.

Bars are nothing new in Korea, neither are gay bars. This article is not really about gay bars and identity politics, rather it is more about a really good bar and nice people.  Recently in Kansas, your typical white-supremacist with a dirty trucker-stash, greasy stained white shirt and a pot belly on the eve of Passover, a Jewish holiday, gunned down a Jewish community center in Kansas City. His victims though, turned out not to be Jewish, rather Presbyterian, and just hanging out at the center for fun. This was really sad. It is 2014, the USofA has Obama as a president, like him or not, he’s there. Korea has a woman as president. Someday maybe even a Black-Korean, gay, Jewish-Hindu-Pastafarian, trans-gender person will be president of Korea and the USofA at the same time and you know what, people won’t care whether or not they wear lipstick and pray on Friday nights and like to suck cock. What they will care about is the economy.