We boarded the KTX from Gwangju with a soju infused watermelon and flask full of Jack Daniels. There is no better way to enjoy the trip to Seoul than having a few beverages and getting ready to rage at a festival. We were on our way to the world’s largest paint party, Life in Color. The name LIC was once called Dayglow, but changed in 2012 to help with international expansion. Regardless of the name, I was ready to embrace it, and after the train ride we headed out to Seoul Land. This part was a bit longer than expected. Once we arrived at Seoul Land it still took about 20-25 minutes to walk to the main stage.

The Seoul Land stage was outside and it was amusing to see family and kids leaving the theme park while hoards of party people were eagerly heading into the festival. Our group arrived a bit later than expected due to a few logistic mishaps, but we caught the end of David Solano. David Solano and R3hab collaborated on the 2013 Life in Color Anthem, titled “Do It”. This year, Solano teamed up with Adventure Club to put together the 2014 anthem, titled “Unleash” (see video below). After Solano went off stage, we moved closer since we were missing the paint splashing by about 10 feet each time. We managed to squeeze our way a lot closer and could really feel the change in energy. Danny Avila was on the decks and I was pumped to see the young Spanish DJ. His success story is pretty amazing. At the age of 18, he met Fedde Le Grand and made quite a strong impression, which later turned into a friendship and one that would lead him to super stardom. Danny has since played along side Tiesto and has played shows in Ibiza, at Tomorrowland and at Coachella. His set met my high expectations and he was the highlight of my Life in Color experience.

The headliner A-Trak put on a great set as well. Before he went on stage, we took this awesome photo:

It was an LIC selfie, and it was strange to stop the music for this, but it was pretty cool. After A-trak finished it was time to head back, shower, and then go clubbing in Gangnam. Overall, the night was perfect and LIC is a must-see event for any EDM fan! 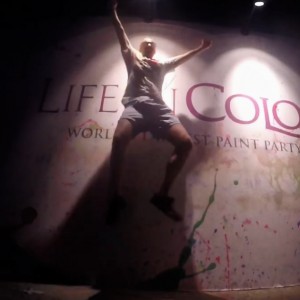