On September 27th at Kookmin University, past the children in amoeba-shaped groups hovering over a soccer ball on a field and their attentive parents with drinks to rush to them at half-time, was something far more interesting. A sport that includes large colorful eyelashes, six-pack abs, and a vertical pole. It wasn’t pole vaulting, it was one of the largest pole dancing events in Korea – The Korea Pole Sport Championship.

I arrived just after 9 am to follow the event from behind the scenes. Backstage the girls slowly showed up to check-in at 9:50. The lighting crew was working on the stage lighting preparing for dress rehearsals. The girls, and a few guys, were changing from their street clothes into their skimpy outfits and large eyelashes. Their faces looking into the mirror surrounded by bulbs for that Vegas-strip lighting. The dressing room also contained two poles for warming up. Several of the girls also had yoga mats to stretch on. At first it was quiet and cordial. As the contestants began filling the space, jockeying for position in a mirror began. Several were sitting on the floor next to a wall of mirrors. Several women were making rounds and requesting more make-up to be put on contestants.

When the rehearsals started, I went out to the front of the stage to take pictures with two other photographers. Each contestant, in the order of performances in the competition, would come out and perform their dance. Sometimes they would stop and walk through a hard trick in their mind to conserve energy for the show. Between each performance, two girls, students of one of the contestants or judges, would climb the pole and wipe it down, while two other girls would follow and apply a liquid sticky-powder called ‘Dry Hands’ for grip. Those girls got a workout, they did that between every contestant for the rehearsals and the competition. One of the guys was having trouble with his music, the CD was skipping (who still uses CD’s?), so he had to stop mid-performance. I hoped he would fix it by the performance.

After the rehearsals, the backstage was buzzing again. Everyone was making their final touches on their outfits, making sure their make-up was perfect, altering their outfits  to fix the ever-present nip-slip issue with skimpy outfits on girls going upside-down, and last minute stretching and performance visualizations. The taped body parts abounded. The chit-chat had subsided and the contestants became competitors.

I left to let the contestants get ready and positioned myself in the second row for the show. The long line of judges were filing into their front-row table and the MC’s, Minkyung Park and Gati Kim, were looking over their scripts. The judges were a diverse group. There were several Korean dance studio owners, two guys that were fitness trainers, and a few dancers/studio owners from China, Japan, and the USA. The lights went down and the MC’s took the stage. The show started at 3 with an excessively long introduction.

To start the show was a hip-hop/pole dance collaboration where three girls were spinning on the same pole at one point. It was mostly two guys, Refresh Ground, up-rocking, but the pole dancing from Pinup Star was good. Then the competition began. The Ayesha’s, Butterflies, and Iron X’s were in good supply. There were a few breaks in the competition for more performances including an approximately 6 year old Korean girl, Youngun Choi, pole-dancing uncomfortably. However, that was cute compared to the 11ish year old Chinese girl, Huilin Chen, who came out in a tutu. At first, I was pleased that it was trying to be cute because I find young girls pole dancing a little weird until she ripped off her tutu to reveal a tight cat outfit. She then crawled around on stage provocatively clawing at the air but doing some pretty amazing pole tricks in the process. After was the creepiest interview I’ve seen in a long time. The MC seemed adamant about getting the Chinese girl, who spoke no Korea, to speak Korean. She called him crazy in Chinese and yet he persisted awkwardly. Thankfully, it eventually ended. There was also a performance of the American judge and founder of BeSpun in LA, Leigh Ann Reilly. She put on a clinic of seductive dancing. The following day she was actually offering a dance seminar for those that wished to hone their skills. And the poor guy whose CD was skipping didn’t fix the music and had to his dance cut short again. He exited the stage after giving the arm X signifying ‘no’. 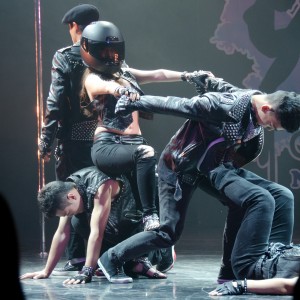 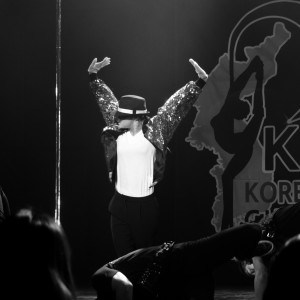 After the competitors had finished their dancing, the scores were being tallied up and the audience was treated to a bellydance from JY and a hip hop/break dancing performance from T.I.P. Crew as well as a female Michael Jackson dance impersonator. The hip hop crew started slow by mostly standing around showing off the girl in the group, but once it picked up it was a pretty good show. The standard windmills, flares, and UFOs were on display but also one of the guys was breaking with a cane and they made a human pyramid with the top guy jumping off backwards into a roll that was pretty impressive. Then the MJ impersonator danced the hits in the iconic black pants, silver rhinestone jacket and tilted hat. They danced all together for the infamous Billy Jean dance to finish the show. It was pretty damn fun. And what a show for the price. I paid 50,000 won for an hour and a half Nanta show, which is a fun show, but this was only 30,000 won for six hours of pole-dancing and hip-hop dancing. Can’t beat that deal. 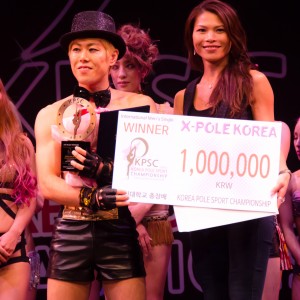 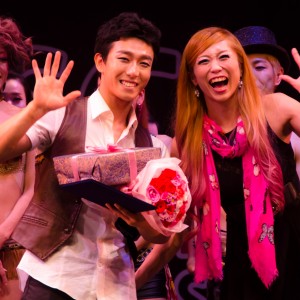 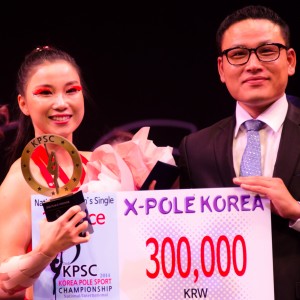 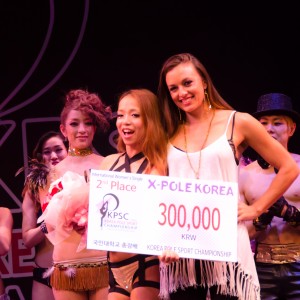 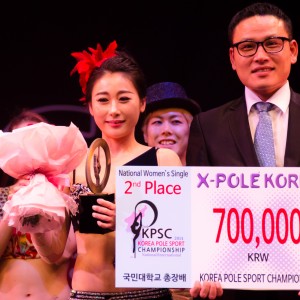 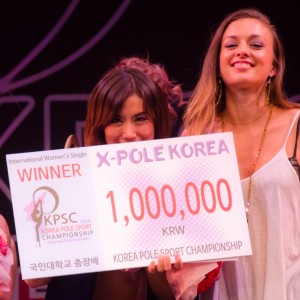 After a short break all the dancers took to the stage for the results. I’ll spare you the reality show build-up and get straight to it. In the national men’s division third place was Seung Cheol Oh, second place was Jaeseop Kim, and the winner was Jack Sparrow – Daesung Yoo. In the men’s international division was Daesung Yoo in second since he entered, and danced, in both divisions and the winner was Ryosuke Nishiori. The men’s divisions were slim pickings, but the women’s national division was stacked. In third place was Eunbin Lee, in second place was Eunji Jung, and our winner was the ripped dynamo Taemi Kim. In the international women’s division third place was Kyunglim Nam, who competed in both the national and international divisions, in second place was Pinoko Nodoka, and the winner was Liu Xne who dazzled with her comfort level with heights and experience as she was grabbing the rafters at one point in her dance. They also honored the “Ultimate Champion” of the whole competition – Taemi Kim, who was shy on the microphone but walked away with loads of prizes and unnaturally large checks. 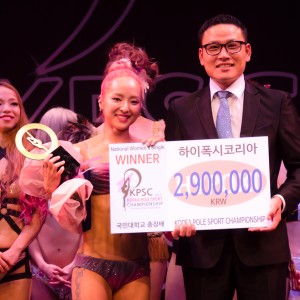 Let there be pictures! After the awards were awarded there was a thirty minute picture session on the stage as the theater emptied out. Many people were heading to the bus bound for the after party in Gangnam at Club Vanguard where they were told they could “use the poles”. You damn right they can use the poles – they use them very well.

(This article  is from our guest writer Tyler, check out his blog) 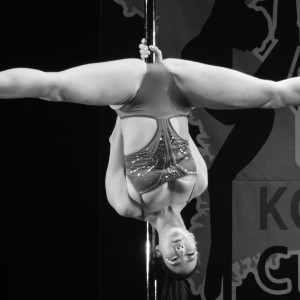 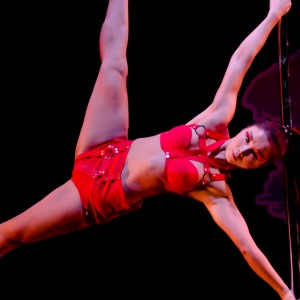 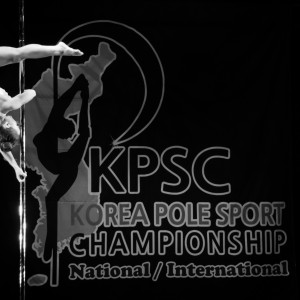 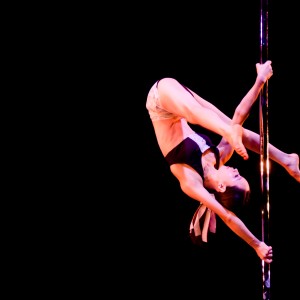 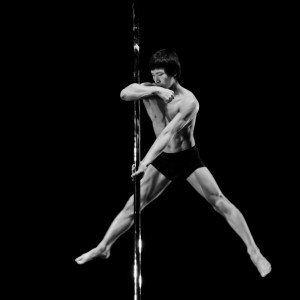 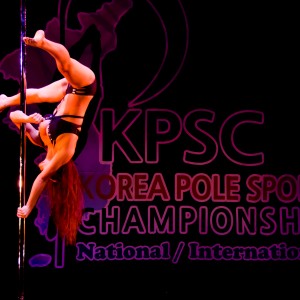 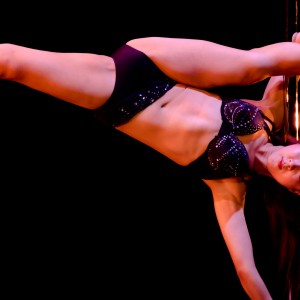 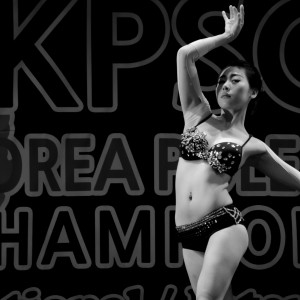 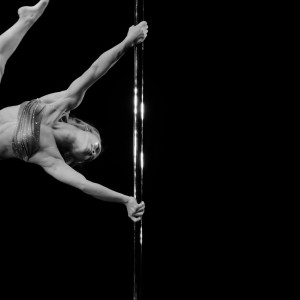 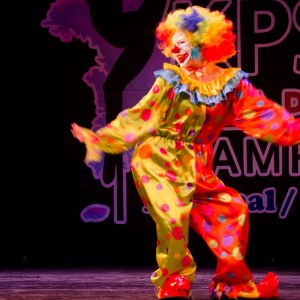 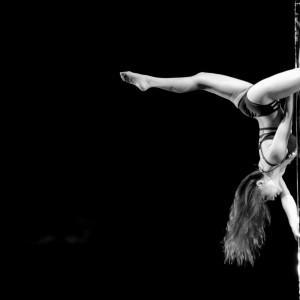 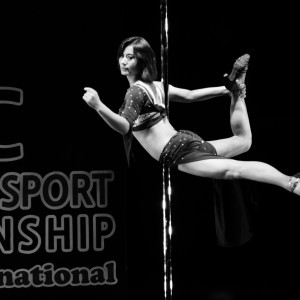