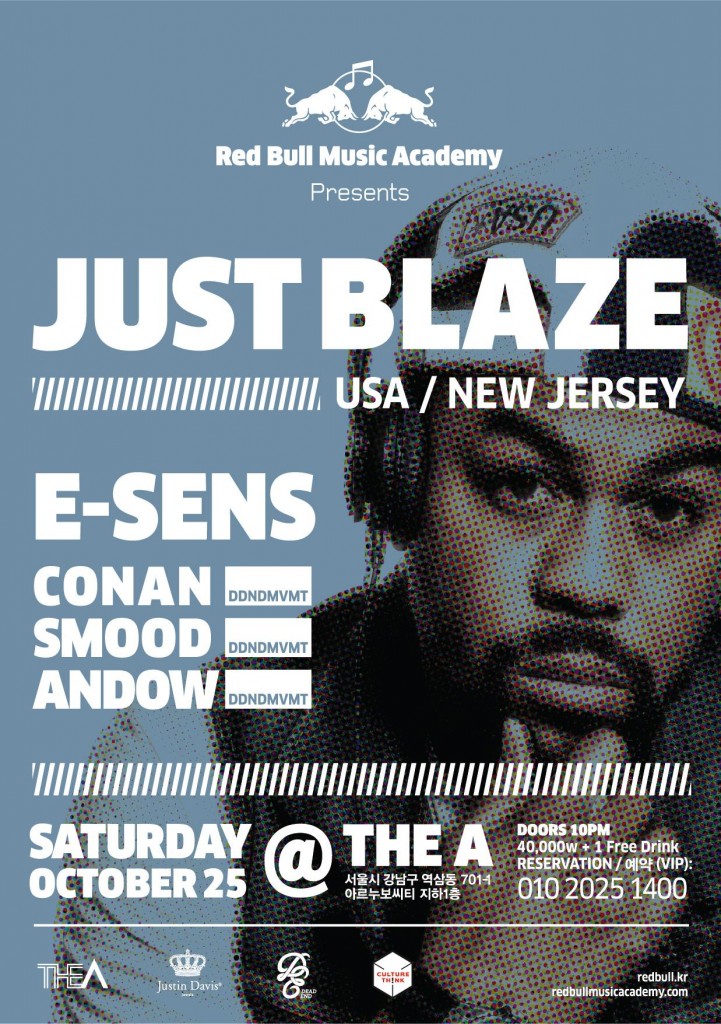 If you’re an ElectRow regular, you’ll know that we’ve done a lot of promotion for the Red Bull Music Academy.  We’re big supporters of everything that Red Bull is doing for the music community and are excited that they are back with another event later this month in Seoul.  On the 25th of October, the Red Bull Music Academy presents the talented DJ/Producer Just Blaze in Seoul at The A in Gangnam.  While tickets are 40,000 KRW and include a free drink, you can also get in the door by registering online through this RSVP link (We highly suggest you click it!).  Although Just Blaze is no stranger to Korea, you definitely don’t want to miss the Grammy Award winner’s performance this month.  Along with E-Sens and Dead End Crew members Conan, Smood, and Andow, this Red Bull Music Academy Clubnighta will be a night to remember.  Here’s what Red Bull Events has to say about this month’s event:

Hip-hop would not be where it is today without Just Blaze, who has been a favorite of the hip-hop A-list for over a decade. The hiphop royalty behind multiple hit songs by Jay-Z, Kanye West, T.I & Rihanna, Snoop Dogg, Usher, Drake, Mariah Carey, and many more continues to claim his throne as the last of Hiphops great producers, alongside the likes of Timbaland and the Neptunes. Just Blaze has an uncanny ability to stay relevant with recent production standards and styles, demonstrated by recent productions with new school MCs like Kendrick Lamar, Rick Ross, and Baauer. In sum, he has been working with everyone who’s anyone.

With his legendary rep for party rocking DJ sets ranging from Hiphop across the board to Classic house from NY sounds to Chicago and beyond, we’re honored to host this great DJ & Producer on Korean soil once again.
Expect the best of party rocking hiphop, bass music the range of trap to twerk, lyrical bliss, all under one roof on October 25th!

You can find more information about Just Blaze in Seoul on Facebook by clicking here.  Don’t forget to RSVP for the event here before the 24th of October.  You can also check out the event on the Red Bull website right here.  We’ll be covering this very special event, so be sure to say hi and have your picture snapped if you see us!