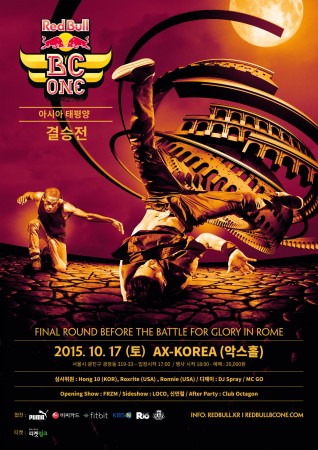 On Saturday October 17th, the Red Bull BC One Asia Pacific Final 2015 will take place at Seoul’s AX Hall from 6-8 PM. The winner of this regional final will advance to the World Final which takes place in Rome, Italy later this year.

As far as one-on-one B-boy competitions go, Red Bull BC One is the most important of them all. It started back in 2004 and has been going strong since.  If you want to find out more about the history of Red Bull BC One and how the events work, check out this page here.

Each year, thousands of dancers compete to make it to the World Final for a chance to take home the highly-coveted Red Bull BC One belt.

Along with other side acts, Korean B-boy Differ will showcase the local scene with a special side act you won’t want to miss!

To find out everything you need to know about the event, visit win.gs/APF2015.  The page on the other side of this link also tells you how to win a Limited Edition custom figurine of Korea’s B-Boy Wing, so get to clicking!

Location of AX Hall: The easiest way to get to the AX Hall is to take the Seoul Metro to Gwangnaru Station on Line 5 (the purple one), and walk out Exit #2.

Livestream: For those of you that are unable to attend, the entire event will be live streamed. From 6-8 PM local time, you will be able to visit redbullbcone.com and watch all the action unfold from wherever you are!