By far one of the most enjoyable aspects of the Korean festival culture is the general kindness and openness of the attendees. Everyone brings a smile and a good “ready to party” attitude. Acquaintances are easy made and the good times keep rolling. This was the case on the first night of the Ultra Music Festival that took place this June at the Olympic sports complex in Seoul. The Elect Row crew was planning out the weekend journalistic attack plans on the festival while having a few drinks at a promotional pavilion. Excitement was running high at the festival as the sunset was spreading across the sky and the first night of DJ’s and live acts were electrifying the warm night air. We made many acquaintances that night, but Dr. Dave’s had by far the most fruitful result. A Young French man approached the Dr, noticing his French decent, and spoke a few French words to be sure his assumptions were correct. Indeed, the Dr answered his question and they spoke for a few sentences in a foreign language that is rare in Korea. After a short while Dr. Dave introduced his new friend Diego to the rest of our group. We exchanged the standard pleasantries and welcomed our new friend to Korea.  As we talked about music Diego mentioned that he had come to Korea to watch a family member perform the next evening.  The journalistic instinct kicked in and we proceeded to unravel his statement. Diego had traveled all the way from Europe to watch Baunder perform as the top  billed act at the Fiat Mega Outdoor.  Naturally we mentioned that we were at the festival on business and Diego asked if we would like to interview Baunder. Numbers were exchanged and rounds of drinks were shared in the excitement of our new opportunity. Diego also gave Elect Row a chance to interview him the following evening, these are the results.

(special thanks to Nicholas who helped with translation)

Elect Row: You are a young man obviously, how old are you?

ER: And you are a now performing DJ? You actually perform?

ER: You are performing where? In Night Clubs?

Diego: Yeah in France, The South of France in Cannes and Nice.

ER: How old do you have to be to perform in the Club?

Diego: Legally in France its 18

ER: Before you started in the club where did you learn your skill

Diego: I did private parties, birthdays and school parties

ER: Did someone teach you how to DJ?

Diego: In France I learned to DJ with videos, and after I did DJ school, in France in Cannes

Diego: In Cannes its 8 months

ER: How old were you when you started?

ER:18 wow, so I think you just finished the DJ school, so now you are coming out and you are in the professional DJ business. But you are professionally trained?

Nicholas: Actually they select people who have skills and interest, like he had, and they recruit them and during 8 months they train them to all the technical  capacities and to perform, which is what he did for the last… more than 8 months actually.

ER: So my question is, did you have to take some test to enter the school?

Diego: No, The test was at the end of school.

ER: Was it difficult for you?

Diego: hahaha it was difficult for all the people

Diego: yeah, it was difficult because it was an examination

ER: But you passed the first time?

ER: At the school in Cannes, do you live there or do you get to go home?

Diego: I go home every night after school?

ER:Ah Cannes is your home town?

Nicholas: He was actually studying until the A levels in a city outside of Cannes and he came back to Cannes to do more DJ studies. And Cannes is his hometown.

ER: Ok, this is good, we want to understand your development because you are still very young. So if you are maybe 30 or 40 we can say you have been here and there and follow you, but we are just seeing you come out. So this is exciting for you. Exciting for you because this is your first time in Korea.

Diego: Yes this is my first time in Korea

ER: So this is a very incredible experience for you

Diego: I don’t have the word to explain (how I feel) for the first time in Korea

Diego: Because, its another world, its wonderful, its amazing its a..

ER: is it part of your dream to play in Korea?

ER: Is it your dream to come and play in international places?

ER: So this is for you a very big step

Diego: Very, it is a very very big step

ER: We will help you because we want to tell your story. Because we listened to your music and it was very good. Ask you cousin, when I met him I said “This kid is awesome” I didn’t know he was your cousin, but he looked at me and I said ‘This kid is awesome”Do you have some social media that we can write down?

Diego: Yeah, in France I have group, our name is NVSG, we met in Marseille in the south of France in a club called One Again, and we are opened for  Gregory Klosman.

Nicholas: When did you start NVSG  ?

ER: Can I search on the internet for your group NVSG?

ER: Great lets talk about the music, do you have a favorite style to play?

ER: Tell me what is trap music

Diego: Trap music is rap, rhymes and the instruments are electronic. Trap music was born in the USA. I am sorry it difficult for me to explain in English.

Nicholas: It’s based on the rap rhythm and it adds the electronic and techno stuff, when he explained to me actually he said its techo+rap= trap. And historically its where the drug dealers would hide their drugs, in the trap.

ER: Interesting, was this TRAP music we were listening to tonight in the Fiat pavilion?

Diego: No, because TRAP is not a style  of music that people really know, Just in the USA. Its begging in Asia now and Europe.

ER: So tonight what style did you play in the Fiat pavilion?

ER:Do you mix Dub step style when you DJ?

Diego:  Yes, a bit, because I like to mix all the styles. So no I try to take Nicaragua music and trap, it is quite difficult.

ER: When we intervened Baunder (link). I asked him what would he share with young DJs who are starting out and he said “Never give up, you must never quit”

ER: Now, were you a musician before you were a DJ? did you play piano or drums?

Diego: I played the piano for five years

ER:Do you think that piano has helped you as a DJ’

Diego: yeah because when I produce and make music it helps me to make the melodies

ER: That is exactly what Paul Van Dyk said this evening when we talked to him, So I think that’s great that you are following the same steps of some of the great DJ’s that played here today. Because (DJing) is not just about the rhythm, it’s about the melody.

Nicholas: He was actually writing melodies for his friends before he even started DJ school.

ER: That’s great, that is a very valuable talent that will help you be a better DJ. So what is next for you Diego?

Diego: MY next project is continue to work with NVSG, and I would like to study event l logistic and productions so I can learn how events like UMF come together and use this knowledge to promote my group NVSG .

ER: Can you tell me more about the group NVSG

ER: Do you think that Greek and Nicaragua music are different?

ER: In Nicaragua is their electronic music and how long did you live there?

Diego: I lived there for two months, I was adopted.

ER: Oh wow, so you were born in Nicaragua and raised in France. Have you been back to Nicaragua?

ER: Did you play any music while you were there?

Diego: No, not yet, I will go back there next year with the plans of performing, and maybe with Baunder

ER: Great, thanks for the interview, Elect Row wishes you the best of luck in the future and we hope we can see one of your performances again soon! 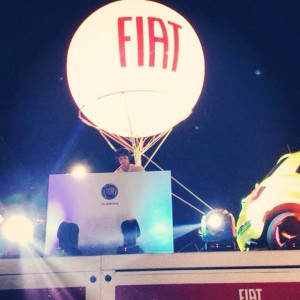